I purchased every item in Bayonetta across my multiple complete playthroughs. In doing so, I’ve come up with a definitive list of everything you should buy first when playing Bayonetta 1.

In total, there are 9 essential items that should be purchased first in Bayonetta. This includes the Durga weapon that deals superb melee damage, three accessories which improves survival rate, and the Witch Heart and Moon Pearl items that’ll boost maximum health and magic respectively.

Buying these items near the beginning of the game helped me greatly survive the rest of the adventure.

Let’s go over every item you should purchase first in Bayonetta so you can survive the journey, too!

Everything You Should Buy First In Bayonetta

When shopping in Bayonetta, players should first focus on purchasing 9 specific items from the shop along with a few optional items that’ll make the game more manageable to play.

Optional items should also be considered in Bayonetta including single use items that increases attack for a duration of time, increases defense for a set period of time, and revives a player upon death.

These single use items can prove life-saving from the first chapter to the last.

I’ve personally used each and every one of these items during my multiple Bayonetta playthroughs, so read on for why these items are the ones you should spend your hard earned halos on.

NOTE: Halos are the in-game currency used in Bayonetta to buy goods. Earn halos by defeating enemies, breaking objects, and completing miscellaneous tasks throughout the game.

Durga Alt. is weapon made up of clawed gauntlet gloves that Bayonetta uses to attack foes.

The Durga also has nice range to its attacks as each hit is a rather sizeable swipe at what is being targeted.

This weapon is a definite must-buy if you’re looking to up your offensive game.

I almost primarily used the Duraga Alt. weapons from the moment they became purchasable to the end of the game. They are that good and are highly recommended.

The Moon of Mahaa-Kalla is an accessory that allows Bayonetta to repel enemy attacks if the correct controller action is performed upon being attacked.

Remember to equip the accessory via the in-game menu for it to take affect.

Performing the controller action (by pushing the movement analog stick in the direction of the enemy) will cause an oncoming attack to be blocked and deflected. No damage taken.

This is arguably the most powerful item in the game once you find the correct timing. I can tell you doing so is hard at first, but it can be done and it is well worth it.

Mastering the Moon of Mahaa-Kalla will make you pretty much impervious to damage and godlike.

Selene’s Light allows the slow motion ability “Witch Time” to activate automatically whenever Bayonetta is attacked. The Magic Gauge, however, will be depleted upon use.

Remember to equip the accessory via the in-game menu for it to take affect.

Activating Witch Time by dodging incoming attacks slows down enemies around Bayonetta, making it easier to survive while granting an opportunity for free counterattacks for a short period of time.

Successfully timed doges, though, can be difficult to master.

Therefore, there is no need to time dodges at the cost of depleting the magic gauge.

This is an essential trade off if you’re having trouble dodging. In simple terms, this accessory will keep you alive.

I enjoyed equipping Selene’s Light when certain parts of the game became too hectic and at the beginning of the game to help me better focus on combat basics.

Just like training wheels on a bike, simply remove this essential accessory when you no longer need it.

The Witch Heart is an item that permanently increases Bayonetta’s health gauge and can be purchased multiple times (although there is a limit).

The more health you have, the more damage you can take, and the longer you will survive.

Thus, Witch Heart increase the single most important status in the game—your health, making it a priority purchase.

Witch Heart, thankfully, only cost 30,000 halos each which makes it comparably cheaper than other items in the shop.

Increasing my health gauge by purchasing Witch Hearts ensured my survival not only in the beginning of the game, but later on when bosses became brutally tough.

The Moon Pearl is an item that permanently increases Bayonetta’s magic gauge and can be purchased multiple times (although there is a limit).

The more magic at one’s disposal means the more often special attacks can be performed which deal substantial damage to foes.

The more damage that is dealt, the faster enemies will fall which makes the Moon Pearl a high priority item.

Thankfully, Moon Pearl only costs 30,000 halos each which makes it comparably cheaper than other items in the shop.

I depended on my extended Magic Gauge (lengthened by Moon Pearls) heavily in the mid and later parts of the game in order to deal massive amounts of damage.

Dodging is arguably the single most important technique in the game, on the ground and in the air.

Furthermore, dodging an enemy attack with the correct timing will also activate the slow motion ability Witch Time that slows enemies around Bayonetta.

I purchased the Air Dodge technique as soon as possible in order to deal with aerial enemies and the larger than life bosses that must be dealt be performing air combat.

Purchasing the defensive technique helped me survive so many fights I wouldn’t have otherwise.

The Stiletto (Heel Slide) technique is a handy mobility attack that causes Bayonetta to zip across the environment at a targeted enemy.

Being able to perform a damage dealing attacks that closes short distances quickly and efficiently is a must-have as early as the first chapter.

Because Stiletto (Heel Slide) is a simply a life saver!

I can’t tell you how many times I have dashed high heel first into a nearby foe to prevent an enemy from hitting me or to dodge an oncoming blow.

This technique was worth every halo and then some.

Bat Within momentarily turns Bayonetta into a flock of bats upon taking damaging when the dodge button is pressed. And doing so reduces damage taken.

Because Bat Within reduces damage, Bayonetta is allowed to survive moments that she otherwise would not.

Any damage reduction is a must in action games and even more so in a frenetic, unforgiving action game such as Bayonetta.

When used properly, Bat Within will save your life and prevent damage which makes it one of the highest priority items in the game.

Nothing feels more satisfying than knowing death is imminent yet surviving an attack by dodging at the right time to transform into a bunch of bats.

Crow Within turns Bayonetta into a crow that can fly for short periods of time and also deal damage.

Using this technique allows Bayonetta to reach unreachable places and maneuver across areas that must be accessed in other ways.

A late game chapter has disappearing floor tiles that are made easy to cross when turning into a crow which makes this technique a beneficial one indeed.

Personally, I used Crow Within primarily to cross gaps and avoid enemy attacks although it can be used to deal damage.

It’s a luxury purchase that I feel pays for itself in short order and specific situations.

Using this item significantly increases damage dealt to enemies which proves beneficial in tough fights such as boss encounters and mid-to-late-game skirmishes.

Mega Yellow Moon Lollipop creates an unbreakable shield around Bayonetta that protects against all damage for a short duration.

Using this item will protect against all damage, and doing so is beneficial from the first chapter to the end credits.

Boss fights, tougher enemies, and enemy hordes are prime areas to use this lollipop to create a defensive shield to help stay alive.

Red Hot Shot revives Bayonetta a single time when her health reaches zero. And it brings Bayonetta back to life and restores some of her health.

Using this item essentially is a second life without needing to start the level or area over. Starting levels from the beginning or the previous check point can be a big chore.

Consume one of these if it looks like death is imminent. Doing so will grant you a second chance while preventing the need to redo the area.

In order to buy the essential items on this list, you must first gain access to Bayonetta’s shop.

Bayonetta’s shop becomes accessible during Chapter 1 “The Angel’s Metropolis”. You can enter the shop by walking into the red circle on the floor and pressing the enter button.

From this point on, the shop entrance point will appear regularly in future chapters.

The shop can also be accessed from the Chapter Menu after unlocking the shop in Chapter 1.

Select the shop menu icon on the left of the screen and press the”Ok” button to get shopping.

Congratulations! Now you know the best items to purchase first in Bayonetta. Enjoy using these items as much as I have.

Bookmark this site to stay up to date with even more Bayonetta guides, information, and more.

Check out all of our handy Bayonetta articles on Bucket List Games.

Screenshots taken by me. Images sourced from product pages, websites, or social media and are credited appropriately. Logos, images, etc. belong to their respective owners. All information current at time of publication.) 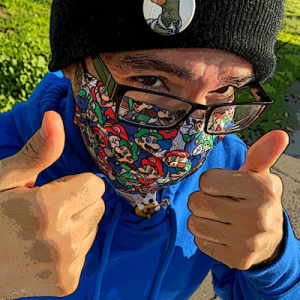 How To Make Money Early On In Littlewood (Nintendo Switch Guide)

What To Do After A Hunt (Monster Hunter Rise Guide)

How To Download Paladins On Nintendo Switch For Free (Picture Guide)